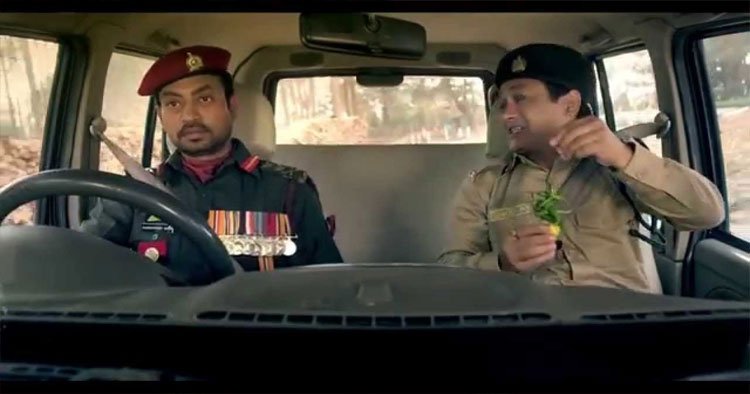 April 30, 2014: A recent advertisement of CEAT tyres mocks Hindu Dharma. As given on one website, description of the advertisement is as followed:

“The advertisement opens to actor Irrfan Khan playing an army officer, driving around on terrible, mountainous terrain with an army jawaan. The latter is trying to hang a nimbu mirchi in the SUV somewhere for safety. Irrfan asks him whether he hangs nimbu mirchi on his gun or an army tank. The jawaan is befuddled and says no.

Cut to the shot where a man suddenly comes in the car’s way and Irrfan has to hit the brakes suddenly. He drives home the point that a car doesn’t need ‘nimbu mirchi’ or superstitions to be safe from accidents, but just CEAT Tyres are more than enough.”

Actually as per Hindu Dharmashastra, tying ‘nimbu mirchi’ to a car protects it from the negative energies because raja-tama predominant Nimbu (Lemon) and Mirchi (Chilli) attracts raja-tama predominant waves in surroundings and protects the car. Also one should remove ‘nimbu mirchi’ in a day or two because they can hold negative energy only for that period and if not removed, they can’t protect the car anymore or may even cause distress to the car or persons using that car.

Even though good condition of tyres is one of the requirement for safe travel, but that does not mean that CEAT should mock Hindu Dharma for their promotion.

It should also be noted that this advertisement does not include any tavij used by Muslims or Cross used by Christians and only targets so-called ‘superstitions’ in Hindu Dharma.

Now it is duty of all Hindus to protest lawfully against it so that CEAT should withdraw the advertisement mocking Hindu Dharma and render unconditional apology to Hindus for hurting religious sentiments of Hindus. All Hindus should also boycott CEAT and other RPG group companies until they withdraw advt and render apology.