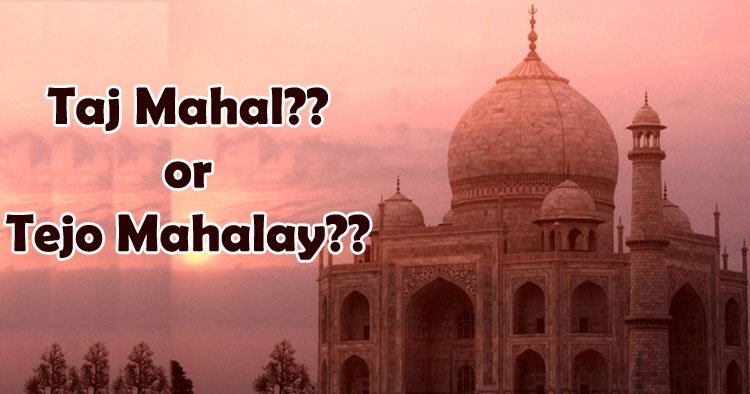 31. Far from the building of the Taj, Shahjahan disfigured it with black koranic lettering and heavily robbed it of its Sanskrit inscription, several idols and two huge stone elephants extending their trunks in a welcome arch over the gateway where visitors these days buy entry tickets. An Englishman, Thomas Twinning, records (pg.191 of his book “Travels in India A Hundred Years ago”) that in November 1794 “I arrived at the high walls which enclose the Taj-e-Mahal and its circumjacent buildings. I here got out of the palanquine and…..mounted a short flight of steps leading to a beautiful portal which formed the centre of this side of the Court Of Elephants as the great area was called.”
Koranic Patches

32. The Taj Mahal is scrawled over with 14 chapters of the Koran but nowhere is there even the slightest or the remotest allusion in that Islamic overwriting to Shahjahan’s authorship of the Taj. Had Shahjahan been the builder he would have said so in so many words before beginning to quote Koran.

33. That Shahjahan, far from building the marble Taj, only disfigured it with black lettering is mentioned by the inscriber Amanat Khan Shirazi himself in an inscription on the building. A close scrutiny of the Koranic lettering reveals that they are grafts patched up with bits of variegated stone on an ancient Shiva temple.

Carbon 14 Test
34. A wooden piece from the riverside doorway of the Taj subjected to the carbon 14 test by an American Laboratory and initiated by Professors at Pratt School of Architecture, New York, has revealed that the door to be 300 years older than Shahjahan, since the doors of the Taj, broken open by Muslim invaders repeatedly from the 11th century onwards, had to be replaced from time to time. The Taj edifice is much older. It belongs to 1155 A.D, i.e., almost 500 years anterior to Shahjahan.

35. Well known Western authorities on architechture like E.B.Havell, Mrs.Kenoyer and Sir W.W.Hunterhave gone on record to say that the TajMahal is built in the Hindu temple style. Havell points out the ground plan of the ancient Hindu Chandi Seva Temple in Java is identical with that of the Taj.

36. A central dome with cupolas at its four corners is a universal feature of Hindu temples.

37. The four marble pillars at the plinth corners are of the Hindu style. They are used as lamp towers during night and watch towers during the day. Such towers serve to demarcate the holy precincts. Hindu wedding altars and the altar set up for God Satyanarayan worship have pillars raised at the four corners.

38. The octagonal shape of the Tajmahal has a special Hindu significance because Hindus alone have special names for the eight directions, and celestial guards assigned to them. The pinnacle points to the heaven while the foundation signifies to the nether world. Hindu forts, cities, palaces and temples genrally have an octagonal layout or some octagonal features so that together with the pinnacle and the foundation they cover all the ten directions in which the king or God holds sway, according to Hindu belief.

39. The Tajmahal has a trident pinncle over the dome. A full scale of the trident pinnacle is inlaid in the red stone courtyard to the east of the Taj. The central shaft of the trident depicts a Kalash (sacred pot) holding two bent mango leaves and a coconut. This is a sacred Hindu motif. Identical pinnacles have been seen over Hindu and Buddhist temples in the Himalayan region. Tridents are also depicted against a red lotus background at the apex of the stately marble arched entrances on all four sides of the Taj.

40. The two buildings which face the marble Taj from the east and west are identical in design, size and shape and yet the eastern building is explained away by Islamic tradition, as a community hall while the western building is claimed to be a mosque. How could buildings meant for radically different purposes be identical? This proves that the western building was put to use as a mosque after seizure of the Taj property by Shahjahan. Curiously enough the building being explained away as a mosque has no minaret. They form a pair af reception pavilions of the Tejomahalaya temple palace.

41. A few yards away from the same flank is the Nakkar Khana alias DrumHouse which is a intolerable incongruity for Islam. The proximity of the Drum House indicates that the western annex was not originally a mosque. Contrarily a drum house is a neccesity in a Hindu temple or palace because Hindu chores,in the morning and evening, begin to the sweet strains of music.

42. The embossed patterns on the marble exterior of the centotaph chamber wall are foilage of the conch shell design and the Hindu letter OM. The octagonally laid marble lattices inside the centotaph chamber depict pink lotuses on their top railing. The Lotus, the conch and the OM are the sacred motifs associated with the Hindu deities and temples.

43. The spot occupied by Mumtaz’s centotaph was formerly occupied by the Hindu Teja Linga a lithic representation of Lord Shiva. Around it are five perambulatory passages. Perambulation could be done around the marble lattice or through the spacious marble chambers surrounding the centotaph chamber, and in the open over the marble platform. It is also customary for the Hindus to have apertures along the perambulatory passage, overlooking the deity. Such apertures exist in the perambulatories in the Tajmahal.

44. The sanctom sanctorum in the Taj has silver doors and gold railings as Hindu temples have. It also had nets of pearl and gems stuffed in the marble lattices. It was the lure of this wealth which made Shahjahan commandeer the Taj from a helpless vassal Jaisingh, the then ruler of Jaipur.

45. Peter Mundy, a Englishman records (in 1632, within a year of Mumtaz’s death) having seen a gem studded gold railing around her tomb. Had the Taj been under construction for 22 years, a costly gold railing would not have been noticed by Peter mundy within a year of Mumtaz’s death. Such costl fixtures are installed in a building only after it is ready for use. This indicates that Mumtaz’s centotaph was grafted in place of the Shivalinga in the centre of the gold railings. Subsequently the gold railings, silver doors, nets of pearls, gem fillings etc. were all carried away to Shahjahan’s treasury. The seizure of the Taj thus constituted an act of highhanded Moghul robery causing a big row between Shahjahan and Jaisingh.

46. In the marble flooring around Mumtaz’s centotaph may be seen tiny mosaic patches. Those patches indicate the spots where the support for the gold railings were embedded in the floor. They indicate a rectangular fencing.

47. Above Mumtaz’s centotaph hangs a chain by which now hangs a lamp. Before capture by Shahjahan the chain used to hold a water pitcher from which water used to drip on the Shivalinga.

48. It is this earlier Hindu tradition in the Tajmahal which gave the Islamic myth of Shahjahan’s love tear dropping on Mumtaz’s tomb on the full moon day of the winter eve.
Treasury Well

49. Between the so-called mosque and the drum house is a multistoried octagonal well with a flight of stairs reaching down to the water level. This is a traditional treasury well in Hindu temple palaces. Treasure chests used to be kept in the lower apartments while treasury personnel had their offices in the upper chambers.

50. Had Shahjahan really built the Taj Mahal as a wonder mausoleum, history would have recorded a specific date on which she was ceremoniously buried in the Taj Mahal. No such date is ever mentioned. This important missing detail decisively exposes the falsity of the Tajmahal legend.

51. Even the year of Mumtaz’s death is unknown. It is variously speculated to be 1629, 1630, 1631 or 1632. Had she deserved a fabulous burial, as is claimed, the date of her death had not been a matter of much speculation. In an harem teeming with 5000 women it was difficult to keep track of dates of death. Apparently the date of Mumtaz’s death was so insignificant an event, as not to merit any special notice. Who would then build a Taj for her burial?

52. Stories of Shahjahan’s exclusive infatuation for Mumtaz’s are concoctions. They have no basis in history nor has any book ever written on their fancied love affairs. Those stories have been invented as an afterthought to make Shahjahan’s authorship of the Taj look plausible.

53. The cost of the Taj is nowhere recorded in Shahjahan’s court papers because Shahjahan never built the Tajmahal. That is why wild estimates of the cost by gullible writers have ranged from 4 million to 91.7 million rupees.

54. Likewise the period of construction has been guessed to be anywhere between 10 years and 22 years. There would have not been any scope for guesswork had the building construction been on record in the court papers.

55. The designer of the Tajmahal is also variously mentioned as Essa Effendy, a Persian or Turk, or Ahmed Mehendis or a Frenchman, Austin deBordeaux, or Geronimo Veroneo, an Italian, or Shahjahan himself.
Records Don’t Exist

56. Twenty thousand labourers are supposed to have worked for 22 years during Shahjahan’s reign in building the Tajmahal. Had this been true, there should have been available in Shahjahan’s court papers design drawings, heaps of labour muster rolls, daily expenditure sheets, bills and receipts of material ordered, and commisioning orders. There is not even a scrap of paper of this kind.

57. It is, therefore, court flatterers, blundering historians, somnolent archeologists, fiction writers, senile poets, careless tourists officials and erring guides who are responsible for hustling the world into believing in Shahjahan’s mythical authorship of the Taj.

58. Description of the gardens around the Taj of Shahjahan’s time mention Ketaki, Jai, Jui, Champa, Maulashree, Harshringar and Bel. All these are plants whose flowers or leaves are used in the worship of Hindu deities. Bel leaves are exclusively used in Lord Shiva’s worship. A graveyard is planted only with shady trees because the idea of using fruit and flower from plants in a cemetary is abhorrent to human conscience.

59. Hindu temples are often built on river banks and sea beaches. The Taj is one such built on the bank of the Yamuna river an ideal location for a Shiva temple.

60. Prophet Mohammad has ordained that the burial spot of a muslim should be inconspicous and must not be marked by even a single tombstone. In flagrant violation of this, the Tajamhal has one grave in the basement and another in the first floor chamber both ascribed to Mumtaz. Those two centotaphs were infact erected by Shahjahan to bury the two tier Shivalingas that were consecrated in the Taj.

(TO BE CONTINUED in forthcoming news ….)